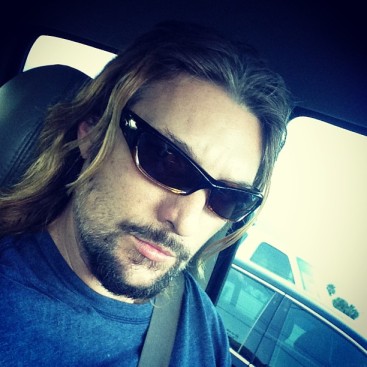 Eddie Bauer Jr. has been shining under his own spotlight for the last several years as an actor, award-winning screenwriter, and Ironman triathlete. In his spare time, he zealously undertakes other action sports like surfing, motocross, and flying.

As busy as Eddie stays, life hasn’t always been this good. For too many years he ran from the demons of addiction and alcoholism. Troubles imploded his life and cost him a marriage.

Without getting into the specifics, a book inspired by Eddie’s struggles is scheduled for release in early 2015. The novel blossomed from Eddie’s award-winning, self-reflective screenplay “Casa del Agua.” Inspired by his life story, the book will in an entertaining mix of fiction, humor, and tragedy and a window into how difficult Eddie’s life became.

But life is better now. Since finding sobriety Eddie’s 23 broken bones, swelling on the brain, and a bite from a curious bullnose shark haven’t slowed him down. If anything, navigating a better, more exciting life has done the opposite.

“I wrote the bio not only as therapy,” he says, “but to beat the folks that would use my past against me.”

“It never really dawned on me that people would appreciate my story and say it inspired them. But it makes me happy that ‘Casa Del Agua’ has won some pretty prestigious awards and caught the attention of Hollywood A-listers.”

Putting his life on paper was a journey of its own.

“The day I decided to tell the story,” Eddie recalls, “I Googled how do I write a screenplay.”

He took notes, spent a couple of months in research, and four more months writing the story.

“Script doctor Norman Fitts read it,” Eddie says, “and he and I tweaked it. Then he translated my handwritten journal notes into the proper industry format.”

While Eddie is proud of not just surviving but thriving, he is a thousand times more proud of his daughter and son, and for getting after raise them solo for several year after his first wife left the family.

“I had two in diapers when she left,” he said, “and wouldn’t of survived that—well none of it for that matter–had it not been for my mother’s support.”

Life has come a long way since.

Happily married to Barbara Bauer, who was instrumental in Eddie’s recovery and whom the children think of as their mother – Eddie III calls her “Mom”—Barbara runs the home, works for Eddie’s mother’s CPA firm, and handles the finances.

Eddie is free to be a “soccer dad” and build his new SikkShades brand with help from a talented team scattered across the country.

“I feel bad sometimes because I leave her (Barbara) to lay down the law,” Eddie says. “But she is the best, and we all know that if not for her there would be a crater where this house is.”

By past comparison life is pretty tame these days for Eddie and his family. He still enjoys the occasional adrenaline rush from action sports and his newest hobby—flying small planes—but helping raise two teenagers keeps him hopping.

“They (the kids) are about all the excitement I can handle,” he says with a laugh, “at least until they go off to college, which is not that far away. The kiddos keep me looking both ways, but they’re not going to be here for too many more years so I figured I should start building my sunglasses line now. By time they head off for college I want it to be a respectable brand that keeps me busy.”

“We already have distribution, retailers, and many, many athletes depending on us,” he says, “so now it’s like I’ve got two full-time jobs.”

“I didn’t mean for that to happen,” Eddie adds. “I thought it would take much longer before we received this kind of attention.”

But busy is good and Eddie would prefer it no other way.

“Family first, helping others second, SikkShades third,” he says. “Every day is a gift and I am a blessed and fortunate man to be surrounded by people I love and who love me.”

“There is a road out of the darkness,” he adds. “And I am living proof.”